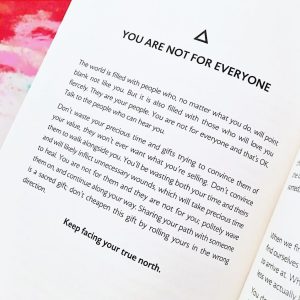 I love this page from a book posted by Hay House on their Facebook page. It may be credited to Rebecca Campbell but I’m not sure. Sorry I don’t know any more details about it to give full credit.

You don’t have to be all things to all people. Even if you bend over backwards, there will always be those for whom you can’t do enough…or at least do enough right. This pertains not only to relative strangers but also people who you would expect to be in your corner. Sometimes you have their support until you start enjoying success at what you’re trying to accomplish then all of sudden they are nowhere to be found. Is it jealousy? insecurity? something else?

I was in that situation many years ago after I had been treated for breast cancer. It’s the experience that put me on my health coaching path because I knew I had to make some changes in my own life to be here for my family. I had a friend who was not as overweight as I was at the time who was fully supportive of me…in the beginning. However, once I started having more success than she was having, the dynamic completely changed. It went really south after her husband paid me a compliment, even though it was very innocent. The friendship never recovered and before it was over she tried on several occasions to derail my efforts. While it’s unfortunate that she was unable to be my friend when I was having success, she didn’t consider that it was a struggle for me too and I had much more at stake than she did. I refused to give in and she couldn’t deal with that.

In my position as a health coach, I find that so many people don’t want help, even when they ask for it. I’m fairly sure I don’t try to force my advice or lifestyle on anyone else but I also won’t compromise on the choices I have made for my own life. People seem to feel the need to almost apologize to me if they make less than stellar food choices in my presence, even though I’m often not even paying attention to what they’re eating. I purposely will look away so they aren’t uncomfortable. I believe they’re judging themselves and the decisions they’re making at the time and it really has nothing to do with me. Regardless, I won’t be changing my approach to my health just to make someone else feel comfortable about their own choices.

Have you ever known someone who didn’t want to see your light shine brightly? Your bright light doesn’t dim theirs. Only they can do that. Live your life the best that you can and don’t let someone else bring you down to make themselves feel good.

Are you dreading the holidays, knowing that you won’t be able to wear the same clothes on New
Year’s that you wore at the beginning of the feeding frenzy we call the holiday season? Are you worried that you might undo all the good you have done recently for your health? Do you think you might go off the rails with your food choices? Do the holidays get really stressful and cause you to make food choices that may not be very healthy?
If any of the above scares you, I can help you get through the four weeks between Thanksgiving and New Year’s with my Healthy Holidays program.  And you won’t even have to leave the comfort of your home.
I am offering SPECIAL PRICING until THANKSGIVING for anyone who signs up by then. The regular price of this program is $297 but until 11/28, the price is only $247…that’s a $50 savings!
If you would like to have a free consultation about the Healthy Holidays program, click here to schedule a no strings attached call.
Share
Tweet
Share
Pin
Posted in Uncategorized