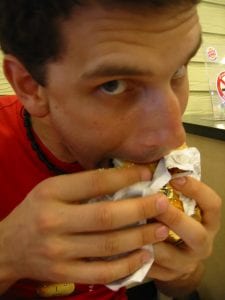 Eating disorders come in many shapes and sizes, are more about a mental state than food and often require medical and psychological support when trying to overcome them. Eating disorders are identified by an obsession with food and/or body shape. These afflictions are quite prevalent with an estimate of 20 million women and 10 million men being affected at some point in their lifetime, according to this article. Most of those stricken are young women.

There are several factors that may trigger an eating disorder:

Following are some known eating disorders:

There are other eating disorders that have similar symptoms but the common denominator is that disordered eating is caused by an unhealthy relationship with food. Although the food aspect is just a symptom of the underlying mental disorder, an important part of the healing is to reestablish a wholesome  body, mind, spirit connection with the food we eat.

If you think your relationship with food falls into one of the categories outlined above, please seek the help of a professional counselor that specializes in eating disorders. It could save your life.

Are you dreading the holidays, knowing that you won’t be able to wear the same clothes on New
Year’s that you wore at the beginning of the feeding frenzy we call the holiday season? Are you worried that you might undo all the good you have done recently for your health? Do you think you might go off the rails with your food choices? Do the holidays get really stressful and cause you to make food choices that may not be very healthy?

If any of the above scares you, I can help you get through the four weeks between Thanksgiving and New Year’s with my Healthy Holidays program.  And you won’t even have to leave the comfort of your home.

I am offering SPECIAL PRICING until THANKSGIVING for anyone who signs up by then. The regular price of this program is $297 but until 11/28, the price is only $247…that’s a $50 savings!