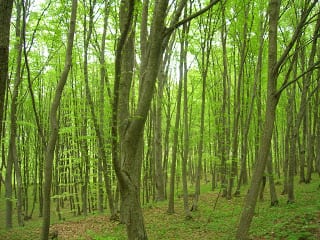 Until recently, I had never heard of ecotherapy but now that I know what it is, I'm in. Ecotherapy refers to the benefits, both physical and psychological, of being in nature. It really makes sense that being outside would make us feel better.

A study conducted in 2009 determined that people who live close to a natural area are likely to be healthier than those who don't. People living close to a park, a woods or other natural areas are less likely to suffer from anxiety and depression.

Another study determined that people who hike or spend time relaxing in the forest have lower blood pressure, cortisol levels and heart rates.

Kids who have ADD and ADHD benefit from being outdoors and playing in fresh air in natural settings rather than being indoors. It is thought that a lot of these kids are also suffering from a "nature deficit" along with having an attention deficit. Even if they sit quietly outside and read a book, their symptoms improve, as long as they're in nature.

There are several reasons why spending time in nature can make you healthier. Vitamin D is a very necessary ingredient for our good health and is best acquired from sunlight through the skin. Vitamin D deficiency has been linked to many health issues like cancer, obesity and some mental illness. Because of our possible overuse of sunscreen, we block the sun's rays from being absorbed. Baking in the sun for hours at a time is not a great idea, but it's very helpful to spend about 20 minutes daily in direct sunlight with as much skin exposed as possible without sunscreen. You are more likely to move when you're outdoors. Exercise in the form of walking, running, hiking, swimming, canoeing or kayaking, or any number of other forms of fun happen when you are in nature.

There is a practice called grounding, the benefits of which  are somewhat controversial. The idea is that by walking barefoot on the earth, your body is grounded, much like an electrical outlet. Most of the time, we do not have direct contact with the earth and as a result we build up a positive charge in the body. Grounding or earthing, as it is sometimes called, helps to reduce that charge. People who believe in the practice feel that it reduces inflammation and improves sleep quality.

Of course, there is also the value of breathing fresh air over recycled, contaminated indoor air. Fresh air, especially near water or after a rainstorm, is full of negative ions. These negative ions are considered nature's antidepressants. Indoor air is deficient of those negative ions and is full of chemicals and other contaminants.

There are a plethora of additional benefits enjoyed by spending time outdoors so rather than sitting in front of your phone or computer reading about them, go outside and enjoy the beautiful spring weather and get your vitamin D and negative ions.