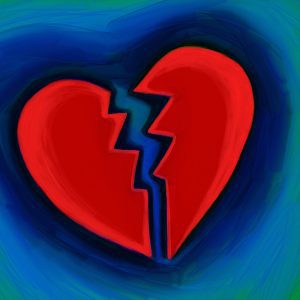 Really? It's a thing?

Most, if not all, of us knows what it feels like to have our hearts broken. But did you know there is actually a cardiac condition called "broken heart syndrome"? It's a temporary condition, often caused by an extreme emotional or highly stressful event. Fortunately, broken heart syndrome, also known as takotsubo cardiomyopathy, usually self corrects in a few days or weeks.

There may be some drugs that could cause it by causing a surge of stress hormones:

Broken heart syndrome is not a heart attack

There are similarities between heart attack and broken heart syndrome but they are not the same. Blocked arteries are often the cause of a heart attack. The blockage is often because of a blood clot that forms at a plaque site causing an interruption of blood flow.  Broken heart syndrome is not caused by a blockage. However, blood flow may be temporarily restricted during the event.

There are some risk factors associated with broken heart syndrome:

Broken heart syndrome usually does not recur, although it can. Drugs such as beta-blockers are used to mitigate the damage of stress hormones and are often prescribed for life after such an event.

Stress management is good for anyone trying to live a heart healthy lifestyle and preventing broken heart syndrome is another good reason for it.

Do You Want Help?

Would you like to have more energy, lose weight, sleep better, and balance your hormones? I am launching another  5 week Sugar Detox Program beginning soon.

This program is open to anyone who:

Aren’t you tired of feeling bloated and lethargic?

If you continue to follow the path you’re on, where will it lead you in six months? a year? Isn’t it time to take a different approach?

What you have done in the past hasn’t worked or at least has not stuck. I can help you change that. Click here for a free consultation. We’ll discuss your challenges and your goals for the coming year and see if we’re a good fit. You have nothing to lose except those nasty cravings.

As a health coach, I work with women who face serious health challenges like heart disease, metabolic syndrome and diabetes or who have been diagnosed as having a precursor to a serious health issue such as high blood pressure, high cholesterol or high blood sugar. I help them make food and lifestyle changes so they can get healthy, live longer and enjoy a fuller, happier, more energetic life. If you would like to have a free consultation about the health challenges you have and the improvements you would like to see in your health, click here to schedule a no strings attached call.