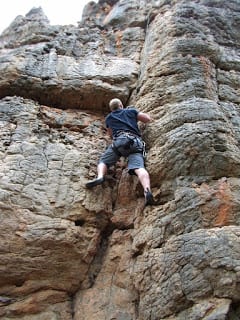 I have seen this video many times and it never fails to choke me up. I love this man’s story of strength, perseverance and ultimate victory. I think it speaks to the resilience of the human spirit when a person has someone else’s belief in them and also believes in themselves enough to use the energy from that belief to accomplish what they previously thought was impossible.

What would you do if you knew success was the only outcome? To what heights would you soar? What chances would you take? If you knew you could not fail, how far would you stretch the limits?

Do you know that the only thing that gets in your way is you? We all have limiting beliefs. We aren’t smart enough, don’t know enough, don’t have the right credentials, aren’t pretty enough, are too young/old, too fat/thin, and scads of other beliefs I haven’t even identified. We often stay in dead end jobs that are mind numbing and dream killing because of our fear of lack. We think the only way we can pay our bills is to go to that same job day after day to earn a paycheck.

I was one of those people who stayed in a job for a very long time when what I really wanted to do was start my own business. I started my business before I retired and now am playing catch up to move it where I want it to be.

I also had those same beliefs that I mentioned above but they don’t serve me so I am writing a different narrative for my life. I am here to serve others through my coaching and leadership. I am fully qualified to do what I am called to do. I can make plenty of money coaching and spreading my message. I have more than enough knowledge and experience to help women regain their health. My age and weight have no bearing on my ability to help others.

What are the limiting beliefs that hold you back from being your best self? How are you going to rewrite the narrative of your life to reach you full potential and realize your wildest dreams?

Write down your limiting beliefs and change each one to a statement that will serve you. Read the new beliefs out loud to yourself over and over and let them really sink in. Your subconscious hears what you say to yourself and absorbs it. It doesn’t know truth from lie so why not give it some good feedback instead of tearing yourself down? You will start to believe the good stuff and will begin acting in a way that will make you achieve what you want. Try it…you have nothing to lose and everything to gain.