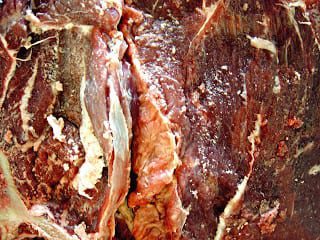 We have been hearing for years that consumption of red meat contributes to an increased risk of developing cardiovascular disease. But now, according to this podcast, there are now three new reasons to avoid eating red meat.

There are other reasons to avoid red meat as well. The high amount of saturated fat in animal protein, leads to a build up of cholesterol in the arteries. Additionally, there is evidence to suggest that the presence of the saturated fat in red meat contributes to the risk of colon and breast cancer. Cooking meat at a high temperature changes the surface of the meat making it carcinogenic. The type of iron found in meat is called heme iron and is found to produce compounds that damage cells leading to the development of cancer.

There are also some benefits to eating small amounts of red meat. The iron contained in red meat is readily absorbable by the body. It's also a good source of Vitamin B12 that supports the development of DNA and maintains the health of nerves and red blood cells. It also provides zinc for a healthy immune system. And of course, let's not forget the protein for strong bones and muscles. there are other food sources for these nutrients that don't come with the warning that eating red meat does.

If you are going to eat red meat, it would be wise to follow these guidelines:

There are plenty of alternatives to achieve the nutritional benefit gained by eating red meat that are less detrimental to your good health. I'll talk about them in a later post.