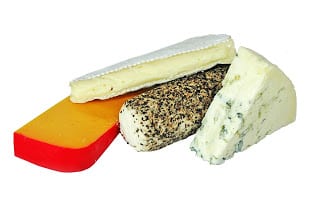 I've heard it referred to as being the nutritional equivalent of Vaseline. We all know how tough it is to cut cheese out of our diet and now you're about to find out why. Alas, you will also find out why you need to do just that.

When you talk about which foods are the hardest to give up, everyone has their own list. Some is salty, some sweet. The usual suspects are: chocolate, ice cream, salty snacks like potato chips,  cookies, but the worst offender on the list, almost without equal is...cheese. I'm so very sorry to tell you what comes next.

This is the story with cheese...it covers all the categories that make food so hard to give up, except being sweet. It's full of fat, has a good mouth feel in its gooey cheesiness and has tons of salt. Adding salt to food, as the food processors and manufacturers do, will guarantee that you won't be able to "eat just one" as stated in an old potato chip commercial. And they are well aware of how enticing the salt they add is. Our bodies need salt and back in the "olden" days, it may have been hard to get enough salt to stay alive so when we find salt our physiology is designed to crave it and eat it. Salt is no longer scarce but our bodies have not evolved much in 10,000 years so salt still turns on our cravings. Salt also turns on our pleasure center located deep inside the brain.

Our tongues are very tuned in to the taste of salt so when it's detected, dopamine is released. Dopamine is the pleasure hormone that is released when we have a pleasurable experience like sex or, in this case, like eating a food we like. Salt causes the pleasure center to be activated and cheese has a lot of salt in it. So it just stands to reason that the salty taste of cheese gets our dopamine on.

But here's another thing you may not have known about cheese. It contains casein which is a protein present in milk and other dairy products and is particularly concentrated in cheese. Most protein molecules, when seen under a microscope, look like a string of beads. Each of those "beads" is an amino acid which will be absorbed into the bloodstream and used as building blocks in the body. However, casein is different. Casein releases fragments called casomorphins or casein derived morphine like compounds. And they attach to the same receptors in the brain as heroin and other narcotics do.

This really makes sense if you think about it. Suppose a baby animal or human won't nurse? It wouldn't survive of course. But the opiate from the casein provides the reward and sets up the dopamine release that causes the baby to want to eat. So that might explain why a baby falls asleep immediately after being fed. There is a mild naturally occurring narcotic in the milk that keeps the baby coming back for more, therefore ensuring its survival, as nature intended.

A cup of milk contains about 8 grams of protein of which about 80% is casein. Turn that into cheese and that increases the concentration of protein to about 56 grams, with again 80% being casein. It's kind of like being able to purchase legal crack in your local grocery store.

There are scientists hired specifically to determine what will bring people back over and over again to purchase foods that are addictive. The precision of added salt and fat along with other chemicals is done so that it's in just the right amounts to make you crave the foods that are the worst for you to eat. They have perfected this skill when it comes to cheese.

Once we are weaned from mother's milk, there is no reason for human beings to consume dairy. We are the only species on the planet that drinks the milk of another species. It does not prevent osteoporosis. Most Eastern cultures do not use dairy in their traditional foods and they have far less osteoporosis in their populations than Western cultures. Calcium can be sourced from dark leafy greens, beans, lentils, sardines, almonds and seeds and they don't expose the consumer to the hormones present in dairy.

So do yourself a favor...when someone says "milk...it does a body good" (or in this case cheese) don't believe them.

LAST DAY TO REGISTER!!!  There is one seat left!

ICYMI...How about a sugar detox? I don't have a fancy name for this program but I can tell you a little about it. We'll begin on September 18th and end October 16th using Zoom.

If you want to get your energy back, lose a few pounds and generally feel better, this is the place for you. I'll share some of the strategies I used to eliminate sugar from my life and to get back on track in my own weight loss journey.

Won't it be nice to eliminate cravings, not feel that "hangry" feeling when your blood sugar drops, and to be able to control what you're eating?

The five week program is only $49! For the price of less than one lunch per week, you can kick sugar to the curb. This is the only time the program will be offered at this low price because it's the first time I'm doing it, but I've used it for myself and it worked on me.

Click here to schedule a quick chat with me so we can decide if this is a good program for you. You'll be glad you did.