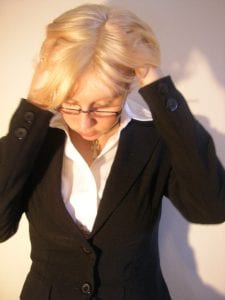 Have you heard of adrenal fatigue? Adrenal fatigue is a relatively new term. It only came into existence in the late 1990s and was coined by James Wilson, PhD, a naturopath and alternative medicine expert. Dr. Wilson theorized that an overstimulation of the adrenal glands, by chronic stress over time could lead to an inconsistent level of cortisol (stress hormone) in the bloodstream...sometimes way too much and sometimes way too little.

Additionally, people with this condition are also usually low on dehydroepiandrosterone (DHEA), also known as the parent hormone, because it is used in the body to produce other hormones. So what that means is, if DHEA is not doing its job, your other hormones are out of whack as well, not just the cortisol. And hormones control a lot of functions in the body...hormones drive the bus.Adrenal fatigue is not a term recognized by the medical community because it can't be tested through conventional means. It's usually diagnosed through a series of symptoms that could be indicative of many other illnesses. It is also identified through saliva testing for cortisol levels at various times during a 24 hour period.Symptoms like excessive fatigue even after a full night of sleep, certain food cravings, or a general feeling of malaise, are often present. These can also be symptoms of depression, sleep apnea, fibromyalgia, among others, which, coupled with the difficulty in testing, makes the medical community discount its existence.Adrenal fatigue is often caused by poor diet, lack of sleep, chronic stress, heavy reliance on caffeine, sugar and other substances to stay alert.  The treatment is usually a change in diet, perhaps the recommendation to take a few supplemental vitamins/minerals and maybe some lifestyle adjustments. Even if you doubt the diagnosis of adrenal fatigue, following this protocol is likely to improve any symptoms you might have that are on the list. It's really a recipe for a healthy life.

Do you have any of the symptoms outlined above? As a health coach, I work with women who are facing serious health challenges like heart disease, metabolic syndrome and diabetes or who have been diagnosed as having a precursor to a serious health issue such as high blood pressure, high cholesterol or high blood sugar. I help them make food and lifestyle changes so they can get healthy, live longer and enjoy a fuller, happier, more energetic life. If you would like to have a free consultation about the health challenges you have and the improvements you would like to see in your health, click here to schedule a no strings attached call.