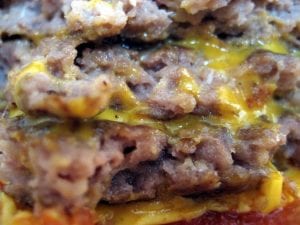 We are being bombarded with advertisements from the fast food restaurants who now offer plant-based burgers in place of burgers made from a beef-like substance. But are they really better for you than the real thing? That is, if you think what you get from the fast food places the real thing. I would argue that you might not want to see what goes into their products…but I digress.

I am not referring to the bean burger alternatives that have been around for some time. They are not meant to resemble beef and usually have a flavor and texture quite distinctly different from their meat-based counterparts. I am referring to the plant based products that have recently flooded the marketplace that are meant to entice meat lovers into replacing what they are used to with something that closely resembles what they like. These substitutes, often known as Impossible Burgers or Beyond Meat, are made to be like the meat patties they are replacing. This is to keep the carnivores happy and help them forget they aren’t eating meat.

According to Dr. David Katz in this article, there are several factors to consider when determining whether these products are a good alternative to your current choices. If you are eating highly processed food that has little to no nutritional value, this might be a favorable alternative for you. If you eat a little too much red meat, because despite this recent report, you can consume too much red  and processed meat, eating the occasional processed plant burger might be somewhat healthier for you. It may also be healthier for the environment and kinder to our animal friends. The issue with these new developments in plant based eating is that it’s just too early to know if long term consumption of these highly processed and manufactured meat substitutes are harmful to your health. So, the short answer is…the jury is still out.

The best way to eat a plant based diet is actually consuming whole foods that are plant based. Think beans, lentils, peas as protein sources. Although most people don’t consider plants as being good protein sources, they actually are. Plants are made up of cells and cells have protein in them. That is a gross oversimplification but you are able to get adequate protein from a whole food plant based diet. In fact, there are many famous athletes who have found this to be a preferable way to eat for high performance. Ever heard of Tom Brady? He’s vegan and still playing football in his forties. Whether you are a fan or not, it’s pretty impressive that he can still perform at such a high level in a grueling sport like football at his age.

Eating whole foods is always better than eating highly processed foods like the new plant based burger options. And making your own veggie burgers is easy but they won’t taste like meat…they will be SO much better. Just sayin’.