One of the the intentions I set for the new year was to start cooking new things. I have a couple of recipe books I have been using that cater to my dietary choice of being plant-based. But I  have neither the time nor the desire to cook every day. I cook a few times a week and make enough so we can have leftovers at least once from each meal. This way, we’re trying new recipes but I’m not tied to the kitchen every day.

As you may have guessed if you’ve been following me this month, I like chickpeas.I use them in hummus, as a substitute for tuna salad and in many cooked recipes. Tonight’s selection is one of those cooked recipes. I have adapted this recipe from a book called Everyday Plant Based. I’ll post the recipe as it is written in the book and tell you the adaptations I made. With the changes I made, it reminded me of a vegetarian tagine. It was delicious!

Try it out, either how it’s written or with my adaptations and let me know what you think. I know it’s going to stay in my rotation of new recipes. 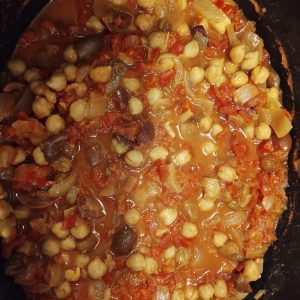 I made this recipe in the crockpot because a) it's easier, b) I can dump and run and c) it's easier. (I really like easier)
5 from 1 vote
Print Recipe Pin Recipe
Course Main Course
Cuisine Mediterranean
Servings 6

What I did instead...I put all the ingredients in the slow cooker at once. I added more chopped onion, used only red peppers and diced them instead of slicing them, added an extra tablespoon of olives and used 3 bay leaves. I also added about 1/2 cup of golden raisins for some sweetness.
Tried this recipe?Let us know how it was!