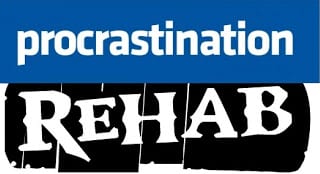 I decided this was a good topic today because, similar to analysis paralysis, procrastination is something I am really good at. I learned from the best because my father was a world-class procrastinator. There was no task, big or small, that he couldn't put off until it became much larger and more time-consuming than if he had only done it when he should have.

I just did this with my tax returns. My taxes are not particularly complex but, because I have my own business, they are filled with details. My record-keeping through the year is complete although it isn't orderly so I have to sort through a ton of papers to get everything recorded properly. Of course, once I sit down and do them, I always wonder why I put the project off as long as I did...every year.

So why do we procrastinate? This quote really spoke to me as I started to pull together some inspiration for today's post.

"Procrastination is the fear of success. People procrastinate because they are afraid of the success that they know will result if they move ahead now. Because success is heavy, carries a lot of responsibility with it, it is much easier to procrastinate and live on the 'someday I'll' philosophy." - Denis Waitley

Why are we so afraid to succeed? I definitely see some truth to this in my life. I have so many aspirations about where I want to take my business but sometimes my dreams take my breath away. I become overwhelmed and go into shutdown mode.

According to Psychology Today, there are three types of procrastinators:

Here are some ways to overcome the inertia of procrastination:

We all can have the tendency to procrastinate from time to time...some more than others, like me. I'm making a conscious effort to stop doing it so often. How about you?