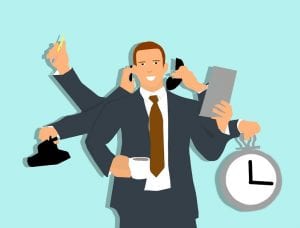 We all go through life with a million things on our 'to-do' lists and we may try to do many of them simultaneously. But, is that really effective? The sad fact is, our brains are not wired to successfully multi-task. Actually, when we try to multi-task we often end up being even less productive even though we think otherwise.

We may think we're completing multiple tasks at the same time but what we're really doing is just shifting our focus from one thing to another. This action makes us more vulnerable to distraction which throws up mental blocks that ultimately slow us down.

For instance, right now as I write this I am also watching a rerun of Friends, which I have probably seen a million times. It's taking me much longer to put my thoughts down because of the distraction of the show...and I'm not even really watching it. It's on in the background and still causing trouble. Many times as I write, I'm also checking Facebook, email, text messages and probably responding where appropriate. As you might imagine, it takes me way longer to write than it probably should. Sometimes I try to convince myself that all the distractions are to help me get inspiration but, who am I kidding?

There were a number of studies done where participants were asked to switch from task to task. The researchers measured the lost time due to the switching of tasks. It turns out that in one study, the subjects were slower at completing tasks that they stopped and started compared to the subjects who repeated the same task multiple times. And of course, the more difficult the tasks, the more time was lost during the switching.

So what does this mean? According to this article, the executive function of the brain controls the ability to multi-task. This area is used to prioritize tasks using two stages to the process: one is goal shifting where the decision to switch tasks is made and the other is role activation where the rules for the previous task are exchanged for the rules for the new task. Each time these changes occur it may only delay by tenths of a second but each time you move from task to task, the lag time accumulates. This may not be an issue for mundane tasks like folding laundry while watching TV but can be problematic in situations requiring concentration or quick reflexes, like texting and driving.

Productivity may not be the only thing negatively affected by multi-tasking. It may also be detrimental to your brain health. Developing brains may be harmed by the constant shifting and barrage of distractions brought on by multi-tasking. It seems that those considered heavy multi-taskers were less successful in identifying and weeding out irrelevant details from important ones, were less mentally organized and even when they were focused on one task, their ability to process seemed to be less efficient and effective. In other words, their cognitive processes were impaired.

Teen-aged brains are particularly vulnerable to the detrimental impact of multi-tasking. Spreading attention too thin and being constantly barraged with distractions during the time when new neural pathways are constantly being formed can negatively impact the developing brain. Could this be a contributing factor to the increase in ADD and ADHD seen in our teen population?

Perhaps a better approach to getting more done is to focus a set amount of time, say 20 minutes, on one task before switching to another. Or better yet, work on one thing until it's completed or as close to completion as you can get before moving on. It may help to keep the brain more organized and help to develop the ability to tune out distractions.

Effective multi-tasking is a myth and not a very good way to accomplish what you need to do as well as it can be done with a little more focus.

Are you dreading the holidays, knowing that you won't be able to wear the same clothes on New

Year's that you wore at the beginning of the feeding frenzy we call the holiday season? Are you worried that you might undo all the good you have done recently for your health? Do you think you might go off the rails with your food choices? Do the holidays get really stressful and cause you to make food choices that may not be very healthy?

If any of the above scares you, I can help you get through the four weeks between Thanksgiving and New Year's with my Healthy Holidays program.  And you won't even have to leave the comfort of your home.

I am offering SPECIAL PRICING until THANKSGIVING for anyone who signs up by then. The regular price of this program is $297 but until 11/28, the price is only $247...that's a $50 savings!