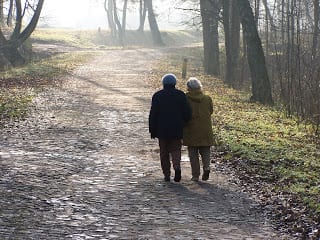 One of the easiest ways to be healthy and fit is to put on your walking shoes, get outside and walk. According to a study published by the University of Warwick, people who walked at least 15,000 steps per day were more likely to be in the healthy range for body mass index (BMI). People who walk more and sit less tend to have lower blood pressure and blood cholesterol levels. Walkers tend to have lower blood glucose levels which helps to minimize the danger of developing diabetes.

In a clinical trial of older adults in Japan, it was found that after 12 weeks of daily walking participants had significantly greater improvement in memory and executive function compared to the control group that just went about their usual routine. Another study of a group of adults published in the Journal of Neurology determined that walking is associated with a larger amount of gray matter in the brain, which is a measure of brain health.

Exercising aerobically can improve your mood and lower stress levels. Walking is no exception. Aerobic exercise helps to release endorphins and improve your mental state. Walking in nature is especially good for this.

According to the International Journal of Behavioral Nutrition and Physical Activity, researchers found that walking about three hours per week lowered the risk of premature death compared to those who did little to no walking. It’s never too late to start either. A study in the journal Maturitas found that seniors with an average age of 80 who walked four times per week were less likely to die over the studies ten year follow up compared to those who walked less.

Experts agree that any amount of walking is good but to really reap the benefits, you need to rack up the miles and step up the pace. The minimum suggested for good health is at least thirty minutes per day and at least five days per week. More and faster is better but you will see some health benefits with just that amount.

Following are some ways to put more steps in your day and to get the most out of your effort.

The important thing is to walk as much as you can. Any amount of walking is better than nothing. The more you move, the better off you will be, the healthier you will be and the longer you might live.